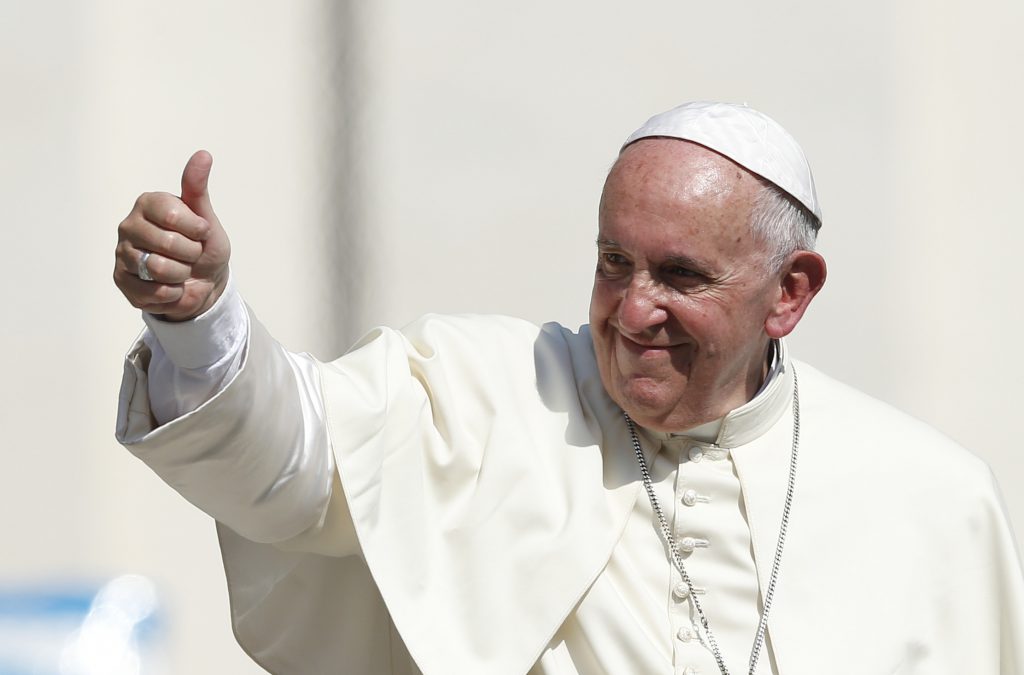 We hear that you are preparing to welcome the current American President to the Vatican in just a few days. Now, you may not be aware of this, seeing as how you live in a small city state all the way over on the other side of the Atlantic Ocean, but this guy can be a bit of a wild card. We understand that diplomacy and Christian charity will likely dictate that you welcome this orange wing-nut into your humble abode with open arms, but please keep in mind that words like “diplomacy” or “Christian” or “charity” are likely well beyond Mr. Trump’s skills of comprehension. You know, right there alongside words and phrases like “honesty” or “integrity” or “highly sensitive confidential information.” Anyway, we thought that we might dip into our bank of experience as American Catholics living for the last few months within this (you’ll have to pardon our French) utter typhoon of batshit insanity, and offer you a bit of advice for how to prepare for the arrival of this Amoral Tangerine Zeppelin at the Holy See.

All of us in America have been made well aware of how Trump likes to greet women when he first meets them, and at the risk of sounding indelicate we feel that we have a responsibility to inform you that it is not with a hearty handshake. Knowing this, you may want to give all of the female residents within the walls of Vatican City an excuse to get off campus for a while. Of course, the benefit of living in the worlds smallest country is that you can literally tell every single one of your female citizens to grab their passport and take a vacation so as to avoid a rather uncomfortable encounter with the President of the United States. These women did not take their vows only to be accosted by the pudgy, spray-tanned digits of man drunk on power and crude oil.

Then again, sending away all of the nuns might just provide Mr. Trump with the kind of boys club, locker room atmosphere that he so dearly loves, and this might just lead to him assaulting your virgin ears with tales of his escapades in Russian hotel rooms, and we are pretty sure that this is not a path that you would like to travel. Consider, instead, the opportunity to mobilize the nuns to your advantage. Have them meet him at the city gates with signs instructing him to “keep your hands off my kitty” or give him instructional tidbits like “drinking the tears of the poor does not make you immortal.” Right from the get-go, Mr. Trump would know that these ladies mean business, and he might just be on his best behavior. Of course, if you do plan on exposing the women of the Vatican to the POTUS, then you should strongly consider equipping them with those big, gnarly medieval chastity belts. Preferably worn visibly over their frocks. So that the world knows that their modesty is protected.

In the end, we suppose it’s your call how to best ensure the safety of these brave women during Mr. Trump’s visit. Better yet, leave that call up to them. Your job is just to sound the alarm and empower the WOVs (Women Of the Vatican) to decide on their own how best to respond to the impending arrival of a whole new brand of molester in their own back yard. Be sure to make it clear that this one’s a president, not a priest.

While the female residents of the Vatican deserve special consideration, you yourself are not completely exempt from an overly enthusiastic greeting from Mr. Trump. His handshakes (real ones, not the below-the-belt specials) are already legendary for popping ligaments and spraining AC joints across the land. Due to excessive duration and vigor, the TrumpShake has been known to incite social awkwardness at best, and outright yelps of pain at its worst. If you don’t mind us saying so, Your Holiness, you seem like a man in good shape for your age, but you would likely be wise to start ripping some curls in the Vatican gymnasium in preparation for Mr. Trump’s unique pump-and-yank style of greeting dignitaries. Perhaps a few push-ups after your morning prayers could go a long way toward avoiding an unfortunate dislocation of some sort. We know that you are a man of the people, but might we actually suggest with great humility that this could be one of those papal “kiss the ring” encounters? Better yet, perhaps a kiss of the papal loafer is in order. Better still, you may want to consider greeting him with a cautious, “If you so much as touch me I’ll have the Swiss Guard display your severed head on a pike in St. Peter’s Square.” It may sound a bit harsh, but the TrumpShake is truly no laughing matter, Your Holiness.

And while you’re at it, check for bugs everywhere else in the Vatican, as well. We know that it seems crazy to have to take these kinds of steps, but ever since Mr. Trump “won” the election in November with a whopping 46% of the popular vote, he has seemed obsessed with recorded conversations. When he is not accusing others of illegally recording conversations with him, he is insinuating that he has tapes of conversations recorded without the knowledge of others. It’s almost as if he feels he has something (or several somethings) to hide! If we were you, we would conduct a clean sweep of your surroundings, and then perhaps plant a few recording devices of your own because, you know, Trumps say the darndest things! You never know if he’s going to ask you to pay off “the big guy upstairs” or perhaps just “drop this whole social justice thing.” You know, as a personal favor between buddies. So my advice would be to plant the bugs yourself, DO NOT SHAKE HIS HAND, and then offer him a gentle reminder that your office is not a confessional, and you are not interested in offering him absolution for his sins. That should cover you in the case that later on you need to play the tapes publicly…or even privately…or as part of a congressional inquiry.

Step 4 – Brush Up on your Russian

Mr. Trump is, let’s say, an enthusiast for the Moscowian way of life. If we were in your shoes, we would greet him with a shot of vodka and a warm plate of piroshkis. He’d love that. It would make him feel right at home. Or it might make him fly into a fit or rage, as he is wont to do. Don’t be offended. Rage is basically Donald Trump’s favorite form of currency. In the very likely case that he does spin completely off the handle, you would be wise to speak to him in his own language. If you can learn the Russian translations for some of his favorite words, such as “tremendous” or “bigly” or “fake news,” this should serve to soothe him almost instantly, just like Mother Mary whispering in the ear of Baby Jesus as he lay in the little manger of Bethlehem. Except instead of Mother Mary it’s you, and instead of Baby Jesus there’s just a grumpy butternut squash wearing a red tie, a toupee, and a frown inside the manger.

We know that you’re already pretty good at this one, but it just never hurts, right? Pray for the patience and the fortitude to sit down with Donald Trump and have anything other than white-hot hate daggers projecting out of your eyeballs. You’ll probably be much better at this than we would, Your Holiness. Pray for wisdom so that you can maneuver through a conversation that will undoubtedly be one of the strangest of your life, and then for the humility to not flaunt your wisdom in the face of someone who so obviously possesses none of it on his own. Pray that Trump’s traveling circus of dunderheadedness will come and go quickly and quietly and leave you in peace to continue working toward a world where there are more advocates for peace and fewer hot-heads with nuclear codes. Pray that one man and his cronies cannot accomplish enough to actually ruin the beautiful gift of creation that God has given us. And finally, we would ask that you pray for all of us here in the United States who have to call this man our president, who have friends and family members who participate in military operations under his direction, who fight against his reign of incompetence in classrooms and courtrooms, who watch as our nation is torn apart at the seams. Pray for us, and know that we are praying for you, too.

We are sure that you will be receiving a lot of advice in the coming days from a lot of people who are better suited to give it than we are, and we hope that all of this input will help you to feel confident and prepared for your meeting with Mr. Trump. We are confident that you will handle yourself with grace and dignity, and that you will represent the concerns of both the world and the Church with that patented Pope Francis mix of hope, humor, kindheartedness, and gravity that people of all faiths around the world have come to know and love. So we will leave you with just one final bit of advice, the same words of wisdom that Ges plans on sharing someday with his daughter on her prom night: When all else fails, just kick him in the nuts and run away. The world would completely understand. And we here at ChurchDrunk would undoubtedly be standing on the table and cheering.